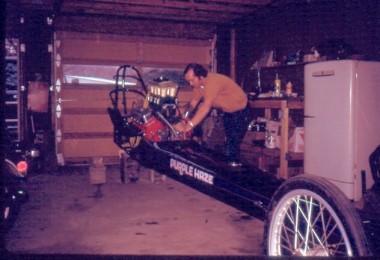 The year 1974 was, in a word, the most enjoyable season that I spent in drag racing. We had all the routines and procedures figured out, I had the driving pretty much down pat, and at our particular level of competition we were doing well for once. Plus, the ongoing monetary outlay leveled off so that we could afford to compete almost every weekend all season long. Drag racing was finally fun!

This came about primarily because we changed over to a more conventional powerplant, ditching the Pontiac in favor of a big-block Chevy, and moving up into the A/FD class. This meant no more strange looks from speed equipment reps when you asked them about special parts for a fuel-burning Pontiac. There were plenty of components readily available, as well as knowledge on how to set things up. We also started paying more attention to appearances, christening the car the Purple Haze with a fancy paint job to match, and even got ourselves some matching purple team shirts. 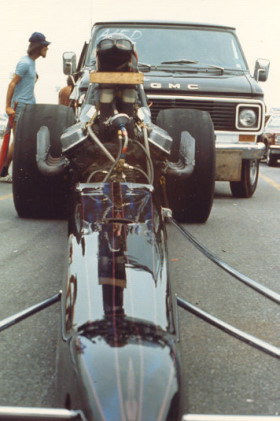 Spending time in the staging lanes.

Things paid off right away, as the first full-throttle run on the new car was several tenths quicker than the best run on the old one. Overall, the car became extremely consistent, and with its fairly low-stressed engine all we had to do was pour 92% nitro in the tank and go. The typical time turned was about 7.50 at 198 mph. This was about .20 off of where we had to be to qualify for the big NHRA events, and about .40 off the record, but on the other hand we never broke anything. Regular weekly maintenance was required, but I don't think that we ever had to drop out of a match due to a mechanical failure all year. In fact, we gained something of a reputation for that.

Other drag racers continued to help us, as was the norm in those days. One of our performance breakthroughs came at the Springnationals in Bowling Green, Kentucky. We were turning 7.70's with what I thought was a high-speed misfire or power dropoff. Another racer informed me that it sounded like the clutch was slipping (we were still running those big top-fuel tires that were a lot of weight to pull on the top end). I added a few grams to the clutch fingers, and the car dropped into the low 7.50's for the rest of the season. It was too late to qualify for that event, but on the way back to Michigan we stopped in for a North Central Fuelers meet in Marion, Ohio, and took our first event victory. 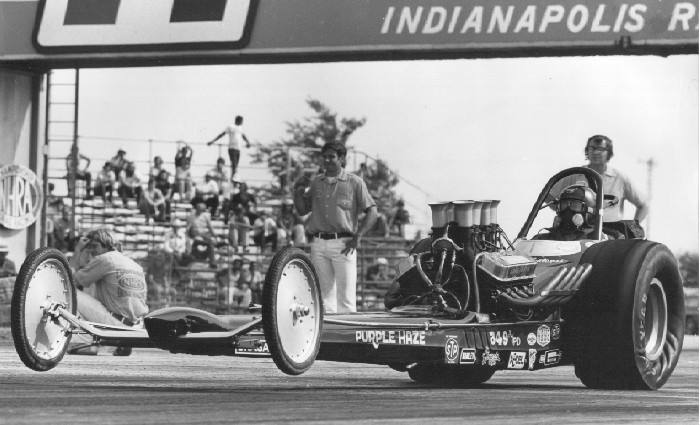 Launching at the '74 U.S. Nationals, slicks wrinkled and carrying the front wheels!

In addition to running at some NHRA national and WCS meets, we continued with the North Central Fuelers and off-weeks over at Onondaga. Weekends on the road with the trailer behind us became part of a standard routine, and we weren't even going broke doing it any longer. Our first NHRA success came that year at the Grandnationals in Montreal, where we managed to qualify in the Pro Comp field. Unfortunately, our first round match went off just after a top fuel round where one of the cars had thoroughly oiled down our lane. A wheel hit the fresh oil-dry, and I can still remember the trackside photographers scrambling as I got fairly sideways and had to shut it off. However, this gave us a taste of "national" competition, dimming the luster of being a top dog at Onondaga. We later made our first entry at the Indy Nationals, but failed to get into the field by a tenth or more.

The North Central Fuelers were also very active in '74, although this was to be their last year of operation. We ran at tracks all over Michigan, Ohio, Indiana, and Kentucky. There were even a couple of eighth-mile tracks, which were a new treat. One thing about eighth-mile strips is that they seemed to assume that you only needed half the shutdown length of a quarter-mile strip. However, a car that can go 190 in the quarter will probably go over 150 in the eighth. Needless to say, this added to the excitement of the racing. We won at least one NCF meet at Marion, Ohio, and were second or third in series points for the season. It was a great group of racers, and we were sorry to see it fold up before the next season.

A Run at the Sanair Grandnationals