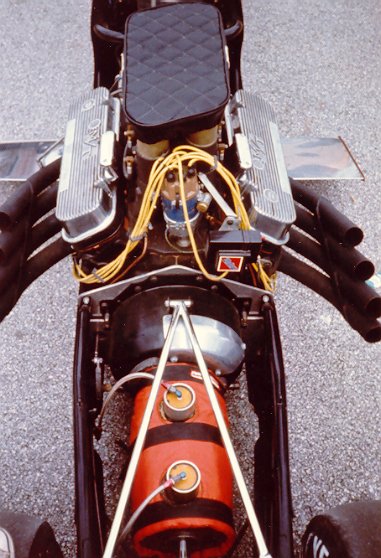 In the off-season between '74 and '75, we got caught up in the dream of being big-time racers. Realistically, I could see that I much preferred the steady income of a software engineer to the uncertainties of making a living in drag racing. Nevertheless, we took the major step of selling the old reliable Purple Haze I and started over again almost from scratch. We bought a used 240" rear-engine top fuel chassis from Bob Farmer of Bob's Drag Chutes and fitted it for our big-block Chevy and a 3-speed Lenco transmission. Appearance was important to us, and the new car sported a beautiful paint job by Jack Kampney, polished aluminum wheels, anodized aluminum details, and all the trimmings.

Seeing ourselves as being on the "national" scene now, we debuted the car at the Gatornationals in March of '75. Again, it showed early promise, as its first full pass was quicker than the old car had ever gone, and we were right down into the low 7.30's. Unfortunately, it took just under 7.30 to make the field, and we were again a few hundredths slow. This was followed by a couple of rather unsuccessful WCS meets, where the car was just a bit too slow or we had mechanical problems. In any case, we were definitely about .25 seconds off the top pace.

Driving this car was a dream, though, when compared with the old slingshot. Sitting out in front of the engine in a stretched-out position and wearing a full-face helmet instead of the suffocating mask meant excellent comfort and visibility. The 240-inch wheelbase made it drive like it was on rails, and the days of the butterflies in the stomach were long past. I really felt like I knew what I was doing behind the wheel by this time, and making a run was pretty much just a matter of jumping in and going for it.

Our performance break this time occurred again at the Sportsnationals. We got some much-needed help from a friend on another race team, who clued me in that my clutch setup was wrong. With the two-speed and big tires on the old car, I had a lot of weight on the fingers of our Hayes dual-disk clutch. It was way too much for the change to a three-speed trans and smaller, lighter tires. I put some lighter weights on and immediately dropped our e.t. into the competitive range. In fact, if we had found this problem earlier, we probably would have qualified well into the field.

Our finest hour with the Purple Haze II was undoubtedly the WCS meet at Cayuga Dragway in Cayuga, Ontario. This was out of our home division, but was actually closer to us than many of the North Central tracks. There was no way to top that weekend: low qualifier, winner of Pro Comp, and recipient of the "Best Appearing Car" award! We were riding high for a long time afterwards, and began to be noticed more by sponsors, NHRA officials, and some of the better-known racers. In fact, the car that we had defeated in the first round that day was a local B/FD that was driven by Frank Hawley, who of course went on to much greater glory.

Back at the Grandnationals in Montreal, we again made a good run to qualify for the field. Unfortunately, a piece of the mallory metal that was used to balance the crank broke loose and exited through the oil pan, also dinging up the engine's bottom end a bit. This is as close as we ever came to actually "blowing an engine." We were able to fix the pan and clean out the other shrapnel, but decided against trying to make a hard run with an unbalanced crankshaft, so withdrew on Sunday morning.

Shortly after this, the reality hit that we simply could not afford the price of being truly competitive on a national NHRA level. We were racing against guys who had more money in their engine than we had in our entire operation. Not only that, but our other competition options were limited. The only circuits that were paying anything were the fuel or alcohol funny cars, and our old North Central Fuelers group was gone. We couldn't really even run at Onondaga any more, because the new car was too long and low, and was set up for modern, high-traction surfaces. We were neither pros nor amateurs, and our bank balances were again headed south.