This turned out to be a shortened season for us, as we finally managed to run our Pontiac engine into the ground until we were tired of fixing it. However, we gained a lot of experience and made the necessary contacts within the drag racing community to help us decide on our future. 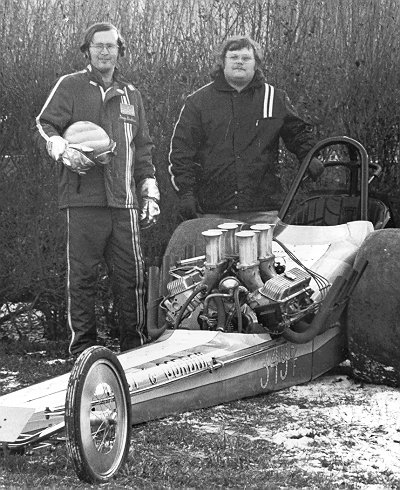 One of our favorite places to race was discovered at Onondaga Dragway, located near Lansing. This was a gritty, "outlaw" track that even in the 70's was like a throwback to an earlier era of drag racing. They ran every Saturday night and paid money for an open "Top Eliminator" bracket. This was a run-what-you-brung category with no entry fees, rules, or safety inspections, and mostly consisted of local junior fuelers, gas dragsters, and the like. "Qualifying" was done by drawing slips out of a hat. It was a slick, bumpy track with a short shutdown, so the outcome on a particular night was never certain.

Spectators' cars would line the fences along the track, with people sitting on the hoods of their cars, partying (and placing bets), while shouting encouragement to us as we pushed up and down the return road. Of course all the regular racers came to know each other, and I'd have to say that this was some of the most fun that I had in racing - this was what it was all about.

We learned early on to cover our injectors when pushing up and down the return road. This was because the slicks would pick up small pieces of gravel and toss them up onto the engine. A lot of it did find its way down into the zoomie headers, so that when the car fired up on its next push down the track, a big spray of gravel would shoot out, peppering the windshield of our push truck. 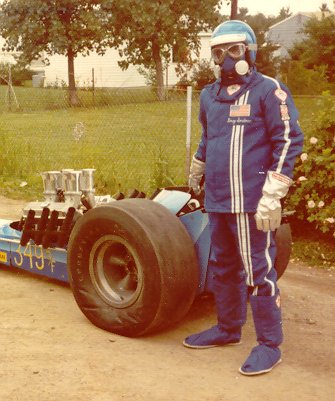 Have any idea how hot these suits were? Fogging up the goggles was always a problem.

At some point during the season, we had another lucky break when we hooked up with the "North Central Fuelers" - a junior-fuel circuit that was being organized by some racers in northern Ohio. This was to be modeled on the successful UDRA pro circuits, where a track would book us in for a single price to put on a (low budget) show. I can still remember heading out for a weekend trip to our first booking at Keystone Raceway, which was an old divided-lane strip just east of Pittsburgh. We felt like a couple of real touring pros! The track turned out to be too dangerous even for our circuit to seriously race on, but we did our best to make a few runs and earn our appearance money.

A low point for our car was reached right after this meet when we discovered that the fuel cap had popped open in the trailer, splashing nitro-laden fuel all over the nose of the car. We had kept the original paintwork, only having our own names painted on the side. This incident helped push us to make some major changes for the next season, starting with a new paint job. 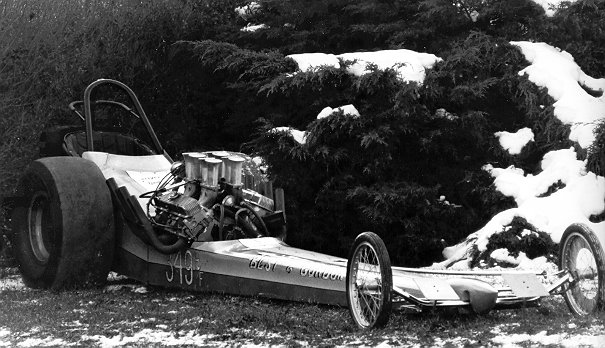 The finished car, waiting for the snow to melt after a long winter.