I might as well admit it up front: we were a couple of rookies and made a lot of rookie mistakes. I had known for years that I wanted to drive a dragster, but I had no background or experience, and didn't even know anybody from the local drag racing scene. There were a number of shops and race teams in the Detroit area at the time, but we were just a couple of recent graduates from General Motors' engineering college, with almost no experience in building or running a nitro-powered race car. 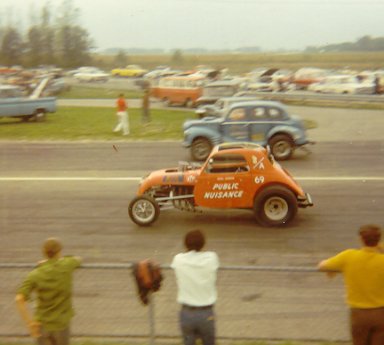 This is not to say that I had never been down a dragstrip before. From the time I owned my first car, I made regular trips to the track with them. My hottest street car had been a GTO that I drove to win a number of trophies in the "Pure Stock" class. I made one foray into a "real" racecar when I bought an old Fiat-bodied altered that was powered by a fairly stock 427 Chevy with Hilborn injectors and a Turboglide transmission. That car ran low 10's at 130+, which was pretty fast considering how crudely the car was constructed. It was a fun, cheap way to feel like a real race driver, but in my last outing with it I broke the frame when it came down from a huge wheelie, and I had to decide where I was going from there. So, when Steve said that he would partner up with me on a real dragster, the die was cast.

Our first big mistake was in the choice of an engine. At the time, I did have some contacts with some engineers at Pontiac Motors (where I worked) who had been having some success racing injected nitro funny cars with Pontiac-based engines. Besides being able to get some help from them, there was the attraction of having something a bit "different" from all the junior fuelers running Chevy small-blocks or Chrysler Hemi engines. We would eventually pay for that desire to be different… 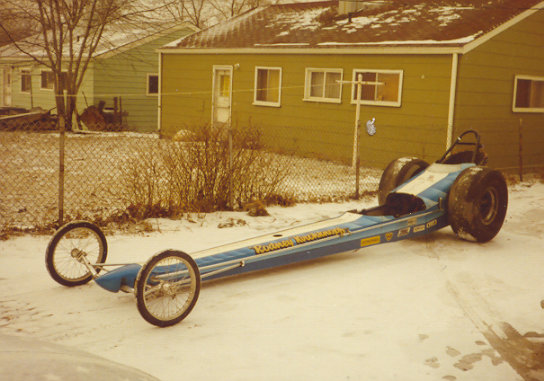 The rolling chassis as delivered from California in the winter of 1972.

The next thing we did was to buy an ex-top-fuel chassis through the ads in National Dragster. The car that we eventually bought was originally owned by a guy in California named Rodney Kirchknopf and was dropped off to us by a friend of his who was traveling back east. It turned out that the car had actually been built in Detroit by the Logghe Stamping Co., one of the early commercial chassis builders. This made it a bit easier on us to get the car down to them for the modifications that were necessary to fit the Pontiac engine and two-speed Lenco tranny into the chassis.

Other than that, we ran the car just as it had arrived in its top-fuel form, including the big Goodyear slicks with inner liners that were a big hassle, and a set of dual chutes. Hey, I had to take out a loan just to buy the fire suit that Bob's Drag Chutes made for me, so we're talking a tight budget here. One of my vivid memories is of the night that we took a trip down to the Ramchargers' shop in Allen Park and picked up our very first 55-gallon drum of nitromethane. I felt that we had really broken into the ranks of serious drag racers. 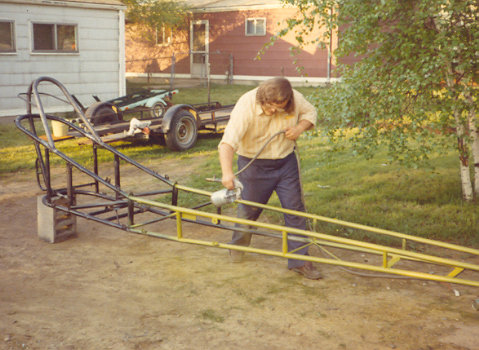 Steve paints the chassis in our state-of-the-art paint booth.

My memory is that the entirety of the 1972 season consisted of two ongoing concerns: getting the car started and making enough runs to get my competition license. This was back before the days of self-starters, so the only way to start one of these was from a fast push down the strip. This meant that we had no way to try anything out except to go to the track on weekends and do it in full view of the stands. The combination of a rookie driver, brand new car built by rookie mechanics, as well as a rookie push truck driver meant that we had some really "hilarious" episodes just in getting the car started consistently and keeping it running long enough to get off the starting line. We're talking stuck throttles, flooded chambers, oil leaks - the whole gamut.

When we made the first trips to the track, I discovered that there's a big difference between talking about being a race driver and actually being strapped into the car. I suddenly remembered that I had seen a few guys being strapped into these things who never climbed back out again. For a while, race days meant no appetite and a lot of trips to the bathroom. I'll even admit that there were a few times when I was actually relieved when something on the car broke and we were done for the week. 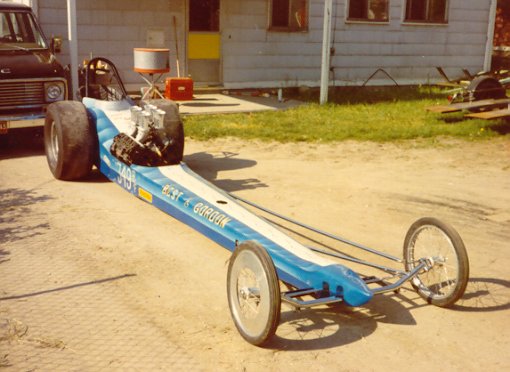 Most of our license runs were made at Tri-City Dragway in Saginaw, MI. This was the best track within a reasonable distance, and they usually had some sort of Saturday night show where I might find a professional driver to sign my license forms. A total of six runs over two sessions were required for the license, but I think it took us about six trips before we got enough complete runs. My completed license application was signed by T/F driver Jim Nicoll, who happened to be there for a match race event, although I doubt that he witnessed any of my runs. In any case, we finally did it and were officially B/FD number 349 in the North Central Division.

I was also baptized into the thrills of piloting a slingshot dragster. On one of my early full runs down the track, I got a face-full of oil that blew out of the breathers, covering my goggles. I was going 160 or so at night, blind, on the poorly lighted shutdown area of the track. I flipped my goggles up and got more oil on my glasses, but managed to see well enough to steer on down the track. Fortunately, Tri-City was a very long track where I didn't even need to use the chute to safely stop.

They almost got the name right, but this was our first time slip from a side-by-side run.

We did manage to meet another low-budget team, Ogle and Robinson, who lived near us and gave us some tips on many of the things that we were doing wrong. We even took a trip with them up to Ubly Dragway -- a small, unsanctioned strip in Michigan's "Thumb" -- to make a few practice runs without the pressures of running at a busier track. Well, we were the fastest cars there that day, so the manager talked us into doing a sort of "match race" with each other. I think that we made it down the strip OK, but this was certainly the first time that we heard our names being called out over the P.A. system. This was starting to be pretty cool!

The season ended without our ever having contended in a real event, but at least we were meeting people and starting to get some useful advice and help. We had high hopes for the next season.