The year after we broke up the Purple Haze team, I got a call from Bob Sweatt, who I remembered from his wild "El Toro" AA/Fuel Altered that was a terror throughout the Midwest circuit. It seemed that the AA/FA class was not being offered by NHRA any longer, but there was a similar alcohol class that was part of Pro Comp, and Bob asked if I'd like to try my hand at driving it for him. 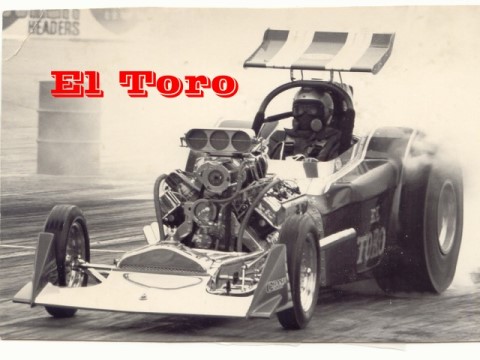 El Toro coming off the line on a run at a WCS
points meet at Indy Raceway Park.

I'll admit that I was of two minds about this. On one hand, it sounded really cool to be able to drive a fast car without any of the hassles of ownership -- mainly having to pay for it. But on the other hand, this car was very similar to a funny car and I was afraid that I'd have to learn to drive all over again. I'd be back behind the engine, in a short wheelbase car, and with a Crower centrifugal clutch instead of the more conventional pedal-operated clutch that I was used to. But after taking a look at this beautiful piece of work as it rolled out of Bob's shop, I knew that I had to take a stab at it.

To make a long story short, it was a disaster. It was nothing like driving a dragster, and I really only managed to make enough runs to qualify for my AA/A license, running a couple of times at Milan Dragway and once at a points meet at Indy. I found out that I really prefer working for myself, as driving someone else's car made me more aware of trying not to make a mistake, and feeling a lot worse when I did make one. After only about three or four weekend outings, we called it quits, and that was truly my last pass down the quarter mile. 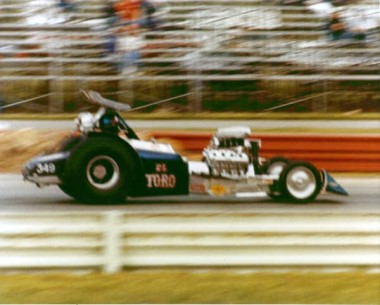 Since I pointedly stayed away from drag racing for several years, I have no idea whatever became of either this car or Bob Sweatt himself. He certainly seems to have also disappeared from the scene, and indeed he passed away in about 2015. In any case, it certainly was a beautiful piece of work! The car even won the coveted Ridler Award at that year's Detroit AutoRama car show (1976). 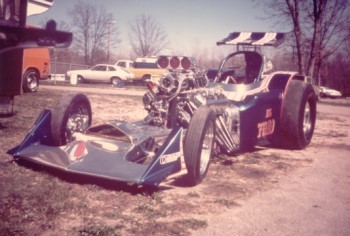 In the pits at Milan Dragway