At the end of August we returned to the U.S. Nationals at Indy, where we would test ourselves against a truly national-scope entry list of over 70 cars vying for a 32-car field. At this time, a good number of blown alky cars, and a few injected fuelers, had dipped into the sixes. However, we had only run under 7.20 a couple of times. Running our 465-inch engine to its maximum, we had been having a problem where we had to change the head gaskets every couple of runs, so things were not looking good.

Look closely and you'll see a cloud of clutch dust over the rear of the car. This was "breaking in" a new disk.

Going into the last day of qualifying, the bubble was getting close to 7.10 and we had run a best ever 7.15, which wasn't good enough. On our first try of the day, something went wrong off the line, which turned out to be a disintegrated clutch disk. We scrambled and managed to get a replacement from the Hayes trailer. When we made our next qualifying run that afternoon, the clutch disk of course was not seated in, so what we mainly got was a big cloud of clutch dust and a lousy time slip. One more chance! I tightened the clutch for more of a launch and made a few other changes that might increase the power, but would probably be tough on the gaskets. In the final round of Pro Comp qualifying, the car almost bogged on the launch, then took off like a rocket in mid range. The time was a 7.06 - good enough to qualify us 25th in this prestigious field. To us, it was like winning the Nationals to have made it to this point! 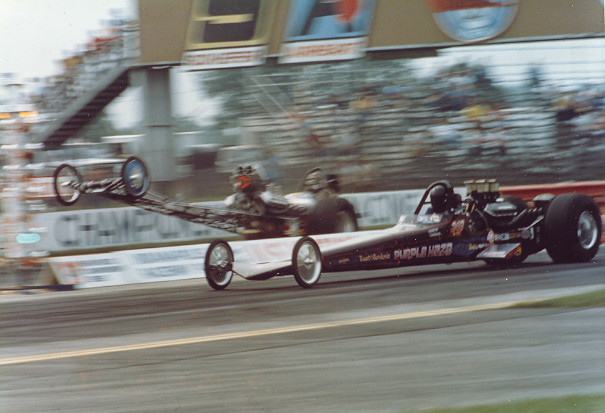 A warmup run on finals day at Indy. Too bad Cox & Amos couldn't have saved this wheelie for the first round, when they beat us.

On the next day, we could tell that the engine had pretty much given what it had to give, and we were out of fresh gaskets and other pieces. We ran about a 7.15 and lost to a blown alky dragster in the next lane, which ran a time in the 6.90's.

The season was pretty much over for us after that, but there was one more event that let the Purple Haze go out in glory. Milan Dragway (Milan, Michigan) arranged to have an open "Pro Comp Eliminator" type of event in early October. It was attended by a lot of the guys that we had raced with at Onondaga, as well as other regional cars. Our increased performance and professional approach paid off for us again that day, as we waded right through the 16-car field to take the top prize, running consistently around 7.20. Our last matchup was against old friend Donn Griffin, who had been running quicker than us in his new alky dragster, but (as I only found out 40 years later!) he had swapped in what turned out to be a bad plug, and we were able to take the win in what turned out to be my last trip down the quarter mile in a dragster.* 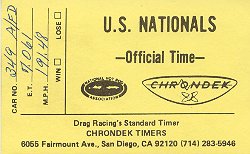 Our best-ever time, qualifying 25th at the U.S. Nationals at Indy.

When the 1975 season ended, we had some big decisions to make. It was obvious that we could not compete from a financial standpoint with an injected fuel car. The steadiest money at that time was from running on a circuit, and that would mean going either to a blown, alcohol dragster or alcohol funny car. Of the two, the dragster made the most sense because we could go with the same chassis and most of our running gear, trailer, etc. However, the popularity of funny cars meant that there were more guarantees of ongoing bookings. So, we decided to sell the dragster that we had only run for a year and move to a flopper.

After selling our chassis and trailer to an East Coast racer (who eventually turned it into an Econorail!), I started feeling too burnt out to start over again building a new car for the third straight year. I was also trying to make some decisions about my engineering career, which up to that time I had seen only as a way to make money to put into the dragster. I'll also admit that some of the fire went out of me when my father died unexpectedly in June of '75. It became clear that the only way to stay competitive was to either have an unlimited personal bank account or a big-money sponsor, neither of which applied to us. 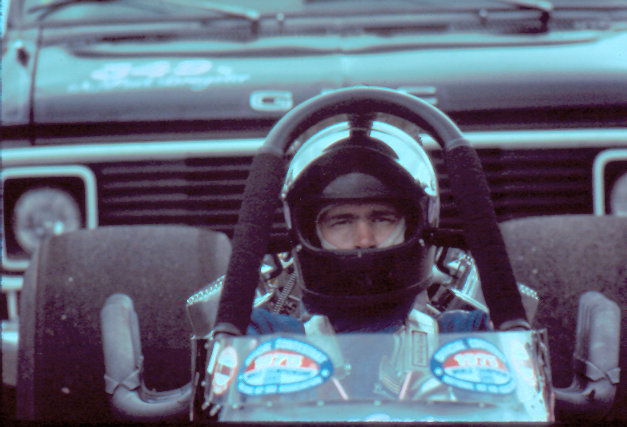 Ready to push down and fire it up!

In any case, Steve and I broke up our partnership at the end of the year and went our separate ways. After an abortive session the next year in trying to drive for another owner, I walked away from drag racing and never went back. I think that it is hard to spend years as a spectator, make the effort to become a participant, and then go back to sitting in the stands. I have not been back to a track since 1976, but occasionally look in on the proceedings on ESPN and Speedvision. The sport has become so professional now that I never see anyone working on their car wearing a greasy t-shirt, and many of the big-name drivers of my day are now either crew chiefs or owners. This is probably good for those that can tap into the big sponsorship money, but something is lost since the days when most of us "did it for love".

* This information was revealed to me by Donn in May of 2014. I still think there might have been a hole-shot involved, 7 cylinders or not, but it does explain why his .3-second advantage disappeared on that run. :-) 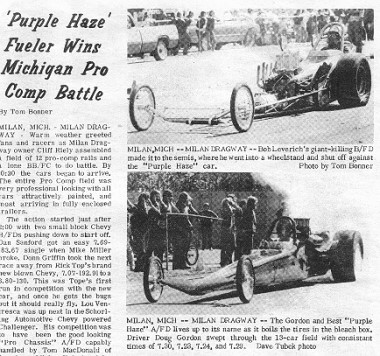 A Drag News article on what turned out to be our last event.